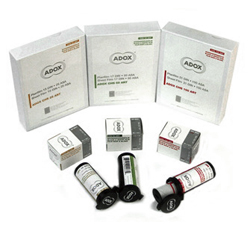 Fotokemika/Samobor has produced the ADOX CHS line of films for us from 1990 to 2012. Due to the increased competition in manufacturing film products in recent years the management of Fotokemika decided to close there factory and cease business in 2012.
As a result we regretfully we have to discontinue the entire CHS film line:

Other ADOX products are NOT affected by this as they are already made by us in Germany.

We try to offer you replacements for the affected products but Fotokemika did not take this decision because they were making to much money. Every product has to be carefully evaluated if bringing a replacement is economically feasible under current market circumstances.

Volumes are in a constant decrease whilst prices may not rise as needed to reflect the new, lower market volume level.
The outcome is consolidation on the side of the manufacturers.
We try to implement as much as we can in our micro factory in Berlin  to overcome this general trend, but we can only proceed one product after the other.
We have been succesfull sofar with the 100 ASA version. The new CHS 100 Type II  has the same old fashioned look and feel like the old CHS 100 but comes with modern production QC and is Made in Germany now.